She sees past his facade into the man hiding his pain behind unbreakable rules and inflexible conditions, but even after the fiery chemistry between them ignites, she struggles to prove to him she is nothing like the woman who jaded him for life.

Heartbroken, Kayla decides on a vacation to help her peace of mind—and ends up at Sandy Ridge. With danger hot on her heels, can the man she turns to first recognize Kayla for who she is? Will he give her the chance she needs to let him know she wants him without condition, before it’s too late?
​
PURCHASE LINKS:
Amazon Universal
B&N
Kobo
iTunes
Smashwords 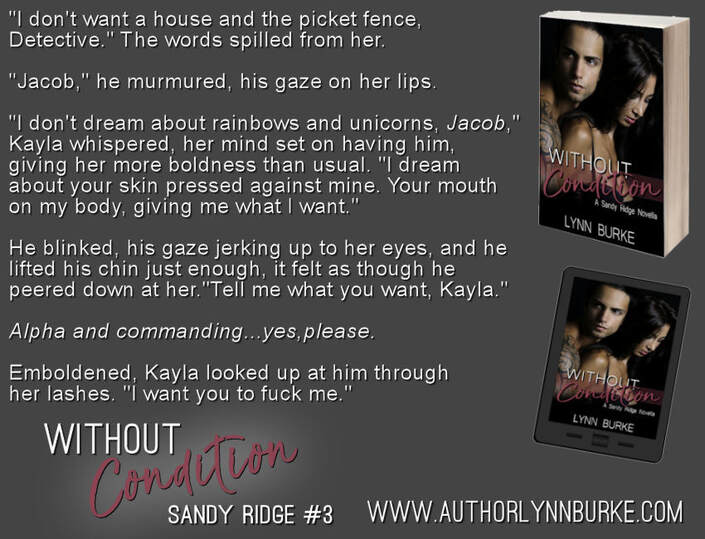 Praise for Without Condition
"I love the twisted tale of lust, loss, and love between Kayla and Ford. Their affair was worth the wait and full of all that I love in a steamy romance." - Amuse Me Books

"This is a book full of suspense , intrigue , action , danger , passion , desire and a couple that work so well together, their interaction with each other flows seamlessly and the attraction smolders whenever they're in close proximity . It's a well written story I only wish it had lasted longer , I didn't want it to be over." ~ Amazon Reviewer

"Detective Ford is 100% sexy smolder! He plays hard to get so well and I was dying a little inside for poor Kayla. This book is fantastically hot and my favorite of the series." ~Amazon Reviewer

"This was an awesome book. It was incredibly entertaining. It certainly kept me turning pages as fast as I could." ~Amazon Reviewer

"This is a scorching conclusion to a hot and steamy trilogy - with a happy ever after ending, of course!
The chemistry between the characters is super hot - Ms Burke has written another winner!" - Jennifer, GR Review
​​
ALL CONTENT OF THIS WEBSITE IS © OF LYNN BURKE  2014-2020